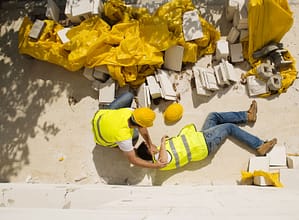 In NC, the law requires employers who regularly employ 3 or more employees in the same business to carry something called workers’ compensation insurance. This insurance policy is for paying employees who are injured while on the job due to some accident. The workers’ compensation system was created to be a No Fault System, meaning that benefits should be paid to the employee regardless of whether they were at fault or whether the employer was at fault. The system was designed to make it easier for injured workers to get the benefits they need without them having to sue the employers and prove that the employer was negligent or at fault.

The law requires the employer’s insurance company to pay out benefits so long as the worker was injured by an accident while during the course and scope of their employment. Whether an injured worker falls within that requirement is often the breeding ground for much debate between the employer’s insurance company and the injured worker. This is precisely why it is important to hire an attorney as soon as possible, so that you can be advised on your right to potential benefits, and to have someone protect your rights to those potential benefits.

Insurance companies will go to great lengths to dispute a claim for workers’ compensation benefits, and without the help of a trained and experienced attorney, you may get less than you deserve, or even worse, you may get nothing at all.

At the Law Offices of William K. Goldfarb, we work hard to keep it a “No Fault System” by fighting against these insurance companies for our injured workers. Without having someone in your corner who is knowledgeable and experienced in the realm of workers’ compensation, you will likely be stuck fighting an uphill battle against insurance companies who don’t have your best interest at heart.

If you’ve been injured on the job, call us today for a free legal consultation. We care about injured workers! 704-296-0055