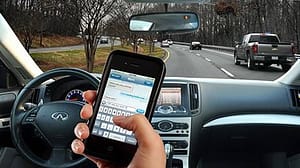 A person injured in an automobile accident may have a potential negligence claim against the at-fault driver and may be entitled to money for their medical bills, their pain and suffering. Over the last few years, North Carolina has ramped up efforts to prevent people from texting while driving because of the large increase in the number of accidents caused by such behaviors. North Carolina has also increased its punishments for drinking and driving in an attempt to deter these behaviors and prevent accidental deaths. However, people are still engaging in this reckless behavior despite these efforts. Luckily for those injured at the hand of these reckless drivers, North Carolina allows claims for punitive damages.

Did you know that if you are the victim of someone’s irresponsible texting or drinking and driving you may be entitled to even more money? That is because NC law allows those victims to seek something called “punitive damages” for the other driver’s recklessness. Generally, NC law allows someone to pursue damages for their economic losses and noneconomic losses resulting from someone else’s negligence. Economic losses are money damages for medical bills, loss of wages, or lost future earning capacity. Noneconomic losses are money damages for your pain and suffering. Punitive damages, on the other hand, are designed to punish the person who injured you, and to act as a deterrent to prevent them from making the same reckless mistake in the future. So if it can be proven that the person who injured you was driving recklessly, texting while driving, or driving while impaired, then you may be able to collect economic, noneconomic, AND punitive damages.

If you have been injured because someone was texting behind the wheel or driving while impaired, it’s important that you contact The Law Offices of William K. Goldfarb today. Our law office has a vast amount of experience with these cases, and we have been featured in North Carolina’s Lawyers Weekly on several occasions for cases such as these. Most notably, William K. Goldfarb was featured in Lawyers Weekly for getting one of his clients $ 975,000.00 for their injuries resulting from a DWI accident. Call us today for a free legal consultation!