It’s happened yet again – students burned when a school bus radiator failed. And again, it is a Thomas Built school bus.

This latest incident happened on Tuesday, February 28, 2017 near Lugoff, SC near Columbia. The bus was carrying the junior varsity and varsity soccer teams to a when students said they heard a loud pop in the back of the bus. Students said hot smoke or steam began to fill the bus and some kind of liquid was running down the aisle.

“When I heard it happen, they were all like ‘Get out! Run! Run!”, one student, Daniel Garcia, told a local news reporter. “I was really scared ‘cause I didn’t know what happened. The smoke was coming and I was like ‘oh, my God, this is really like devastating.”

Another student, Junior Quintana, said, “It was really bad and people were just screaming and everybody was rushing at the door of the bus.”

This case is just one in a string of similar incidences we’ve told you about. Our law firm’s involvement came about as a result of a nearly identical incident in May 2015: a young girl severely burned by antifreeze while riding her school bus to Porter Ridge Middle School in Union County, NC. That little girl is continuing to heal and recover but it is a long, hard journey – one she should not have to endure.

We’ve discovered a long list of similar incidents around the country involving school buses spraying their young riders with hot antifreeze. From the most recent according to media reports: 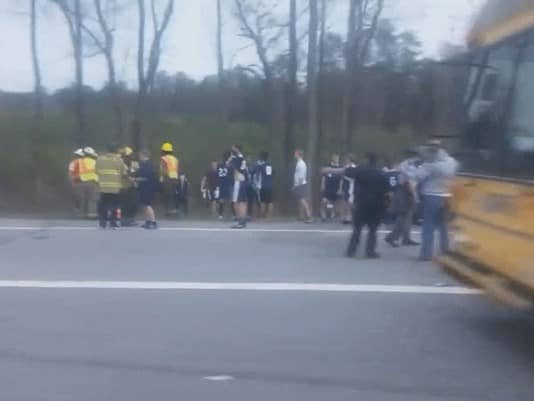 The child injured in Union County in May 2015 was aboard a bus built by Thomas Built. While some of the incidents listed above were noted to involve Thomas Built buses, the manufacturer of all the buses involved has not been confirmed. But as early as September 2013, the state of North Carolina was aware of the failures of heater hose fittings resulting in children receiving burns on feet and legs due to the cracking of plastic fittings in the passenger compartment. A school board member in Salt Lake City is calling for a national movement to address the issue.

The students in South Carolina, in this most recent incident, have no doubt been traumatized. One passenger, Erick Quintana, said, “I was ready to get off the bus ‘cause I was really like nervous scared it might blow.”

We have got to stop our children from being at risk for this kind of injury. The laws in North Carolina do not allow for a legal case against Thomas Built, the bus manufacturer, to go forward. However, South Carolina law is different and a case there could hold Thomas Built accountable and prevent other kids – in any part of the country – from being burned.

If you or someone you know has been injured in an incident similar to this, please feel free to contact us at 704-296-0055 or simply complete the “Contact Us” form on this website.

Let’s put an end to our children from being at risk of suffering burns on a school bus.