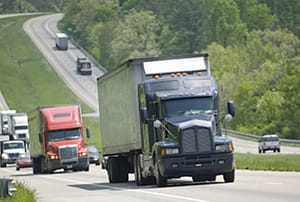 You and the Highway:
Speeding 18-Wheelers

You may soon notice a change on the highways as you travel – large vehicles going much slower than you are used to seeing.

Safety regulators want to force trucks, buses and other large vehicles to slow down by requiring them to have speed governors installed. The governors would cap speeds of newly made U.S. vehicles that weight more than 26,000 pounds. Regulators are currently considering a cap of 60, 65 or 68 miles per hour but that has yet to be decided. Regardless of the speed, the governors will make it impossible to exceed the set limit.

The federal government said capping speed for new, large vehicles would reduce the 1,115 fatal crashes involving big rigs each year and save $1 billion in fuel costs and millions of gallons in fuel each year. The proposal currently wouldn’t require older trucks to install the devices but regulators are still considering it.

But as with most proposed regulation, this one is not without controversy.   First, many truckers claim governors would be dangerous since they would force trucks to travel at much slower speeds than other drivers. And that, they claim, could actually increase the number of crashes. Second, some feel governors should apply to older vehicles as well – not just newly manufactured ones. But the National Highway Traffic Safety Administration says retrofitting the governors would be too costly – anywhere from $100 to $2,000 per vehicle.

Despite the arguments for both sides, there is a compelling reason to act. An investigation last year by the Associated Press found that 14 states have speed limits for trucks that are equal to or higher than the speeds their tires are designed to handle. Most trucks tires aren’t rated for faster than 75 miles per hour. Tire manufacturers say traveling faster than that can lead to blow outs…. creating other safety issues.

The proposal is at the end of a 60-day comment stage for people to weigh in with their opinions. We’ll let you know what happens. Check back on this website for updates.

And if you’ve been in a collision or been injured in an incident involving a large vehicle, we can help. You can call the Law Offices of William K. Goldfarb at 704-296-0055 or simply complete the “Contact Us” form on this website.