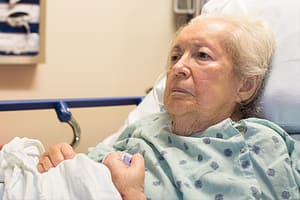 By all accounts, Janet Prochazka was an amazing older woman. At age 75, she lived alone, worked as a tutor, was active and outspoken. But in March of this year, Janet fell and ended up hospitalized. Her stay there turned out to be life-changing – and not for the better.

Janet didn’t sleep or eat well in the San Francisco hospital. She became confused, agitated, contracted a serious infection and, after three weeks in the hospital, she was discharged but was far weaker than before, shaky and unable to think clearly.

Many elderly patients deteriorate mentally or physically when hospitalized. According to research published by the Journal of American Medical Association (JAMA):

As a result, seniors who had been independent suddenly find themselves needing assistance with the basics like bathing, dressing, walking and feeding themselves.

San Francisco General Hospital has an Acute Care of Elders (ACE) ward. It has special accommodations and care providers just for the unique needs of the older patient. Their focus is on getting the patients back home and as independent as possible.

The staff let the patients practice doing things for themselves as much as possible during their hospitalization. They encourage patients to get out of bed, move around, and eat in a communal dining room. They also continually test the patients’ memory. But there are only about 200 such units around the country and space in them is limited. So not all seniors can be admitted.

How hospitals handle the elderly is a pressing problem. Nearly 13 million seniors are admitted to the hospital every year and they stay longer than younger patients. A 2010 report by the Department of Health and Human Services found that more than a fourth of hospitalized Medicare patients suffered harm as a result of medical care. And a medical researcher at the University of California notes that hospitals face few consequences if elderly patients become more impaired during their stays. So, he says, most hospitals track those patients, adding “If you don’t measure it, you can’t fix it.”

As for Janet Prochazka, she is considering moving from California to Maine so her relatives can help with her support. “I have been somebody who has always been both mentally and physically active,” she said. “Before I fell…I was respected for what I have and what I did and all of a sudden, I’m not.”

If you or a loved one have questions about the medical care you’ve received, feel free to call our office to discuss.

*A version of this story was published by Kaiser Health News, a nonprofit health news service unaffiliated with Kaiser Permanente.