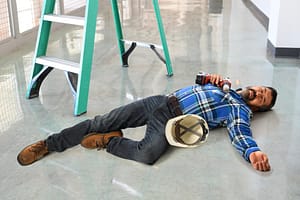 North Carolina is a very diverse place to live. Many people leave their home countries and come to the United States looking for opportunity. Many come to North Carolina for the beautiful weather and scenery. Sadly, some individuals are not fortunate enough to come here with the benefit of a visa or legal status. Many of these individuals live here under constant fear of deportation while they navigate through the convoluted, and often very drawn out, immigration system.   Many of these people often find themselves finding work that involves heavy manual labor, which carries many risks associated with that type of employment.   Did you know that people who do not yet have legal immigration status and get injured by an accident while on the job may still be entitled to workers’ compensation benefits?

Many immigrants are afraid to report work place injuries out of fear that they might lose their job, or even worse, get deported. However, the North Carolina Workers’ Compensation Act was created to be a no fault system, and does not take an injured worker’s legal status into consideration when determining whether they are entitled to workers’ compensation benefits. Therefore, it is important that people know that when they get injured on the job, they need to report it and file a claim – regardless of their legal immigration status!

It’s important to know that North Carolina generally only allows an injured worker to file a claim if they reported it within 30 days of the accident. So time is of the essence! If you have been injured on the job, and need a free legal consultation on your right to potential benefits, contact us today at 704-296-0055! You may be entitled to lost wages, loss of earning capacity, payment for medical bills and services, and payment for any permanent injuries. Call The Law Offices of William K. Goldfarb today. We are here to help ALL who have been injured!

In North Carolina, the law requires employers who regularly employ three or more employees in the same business to carry something called “workers’ compensation insurance.” This type of insurance policy was designed to pay employees who are injured while on the job due to some type of accident. The workers’ compensation system was created to be a “No Fault System,” meaning that benefits should be paid to an injured employee regardless of whether they were at fault or whether the employer was at fault. The system was designed to make it easier for injured workers to get the benefits they need without having to sue the employers and prove that the employer was negligent or at fault. Provided below are common workplace injuries that our office sees:

The law generally requires that some accident occur at work in order for an injured worker to receive benefits. This means that something unusual or unexpected occurred causing the injury. However, the law has carved out an exception for back injuries. A back injury may be compensable in two ways, 1) the injury occurred because of an accident at work, or 2) if the back injury can be pinpointed to a specific event and point in time – as opposed to a gradual onset of pain over a period of time.

This means that if you have a job that requires you to bend over occasionally, and on one occasion you bend over and strain your back – then you may be entitled to workers’ compensation benefits. Instead of having to prove that you injured your back due to some unexpected accident, all you have to show is a specific traumatic event where your back was injured. If you bend over or pick something up while working, you could be eligible for benefits. It could be injuries such as:

Many jobs require employees to do work that involves repetitive motion, such as; typing on computers or working on an assembly line. Employees who have to make the same motions at work, over and over again, can experience injury to their muscles as a result of the repetitive motion. Workers who are injured by these repetitive motions may be eligible for workers’ compensation benefits. The most common injuries we see are:

If an employee is assaulted over a dispute concerning work, then the injured employee may be entitled to benefits. However, the fight must have some relationship to the work, and not simply be a result of hatred or personal animosity.

Workers’ compensation benefits may be available to workers who developed some disease caused by (or significantly contributed to by) causes and conditions that are peculiar to that type of employment. It must be shown that the employee was at a greater risk of developing the disease in the workplace than members of the general public, and not that the work merely aggravated a preexisting disease. We commonly see occupational disease cases where the type of employment is industrial in nature. Common occupational diseases and causes include:

Most people don’t realize that heart attacks that occur at work may also be compensable if it was the result of some unusual or extraordinary exertion created by the work.

If an injured worker’s type of employment exposed them to a greater risk of hazardous weather than members of the general public, then they may be eligible for benefits for injuries resulting from such weather conditions. For example: An employee who works on roofs for a living, who is subjected to the hot sun while working on black shingle all day and every day is likely considered to be exposed to a greater risk of heat stroke than members of the general public. If they have a heat stroke while working in the heat, and fall off the roof, they will likely be eligible for workers’ compensation benefits.

In NC, the law requires employers who regularly employ 3 or more employees in the same business to carry something called workers’ compensation insurance. This insurance policy is for paying employees who are injured while on the job due to some accident. The workers’ compensation system was created to be a No Fault System, meaning that benefits should be paid to the employee regardless of whether they were at fault or whether the employer was at fault. The system was designed to make it easier for injured workers to get the benefits they need without them having to sue the employers and prove that the employer was negligent or at fault.

The law requires the employer’s insurance company to pay out benefits so long as the worker was injured by an accident while during the course and scope of their employment. Whether an injured worker falls within that requirement is often the breeding ground for much debate between the employer’s insurance company and the injured worker. This is precisely why it is important to hire an attorney as soon as possible, so that you can be advised on your right to potential benefits, and to have someone protect your rights to those potential benefits.

Insurance companies will go to great lengths to dispute a claim for workers’ compensation benefits, and without the help of a trained and experienced attorney, you may get less than you deserve, or even worse, you may get nothing at all.

At the Law Offices of William K. Goldfarb, we work hard to keep it a “No Fault System” by fighting against these insurance companies for our injured workers. Without having someone in your corner who is knowledgeable and experienced in the realm of workers’ compensation, you will likely be stuck fighting an uphill battle against insurance companies who don’t have your best interest at heart.

If you’ve been injured on the job, call us today for a free legal consultation. We care about injured workers! 704-296-0055